Today, please permit me to be comical. I have certain assumptions to make about Samson as a judge in the Bible. I tried to imagine Samson and his wife as Nigerians and I settled for the fact that Samson isn’t a Nigerian.

NB: Nothing is so serious about this post. Just read for the fun.

Imagine Samson was a Nigerian (lol). I’m pretty sure that he would have found his way of out Delilah’s life. Anyways, let me do a critical analysis (funny) on Samson and Delilah as Nigerians.

In Judges 14, Samson saw a philistine woman in Timnah and told his parents to help him get her because he had made a decision to marry her. His parents tried to dissuade him (probably get married to an Israelite woman) but be refused.  Here, I guess if Samson was a Nigerian man (not all Nigerian men though), he would have listened to his parents advice to get married to someone from his tribe… As in the way some parents want their children to marry from same tribe : Yoruba= Yoruba.  Anyways, Samson’s parents kind of reasoned like some Nigerian parents. Lol.

Several days later when Samson went to look at the dead lion, he found a swarm of bees in its body that had made honey. Hmmmm, Samson is definitely not a Nigerian. Imagine he was an igbo guy, he would have sold the honey immediately and not bothered giving his parents.  It would have fetched him more money to throw a big party for the bride. Lol.

Let me talk about Samson’s wife. The men whom Samson gave a riddle and asked them to find the answer are Nigerians. They are like the thieves that go to people’s houses and threaten to kill them if they don’t provide the money in the house. They threatened Samson’s wife saying that if she doesn’t get the answer for them, they will burn the lady’s household to death.  As a wise Nigerian woman, she cried for the rest of the seven days of the party and said to Samson “you don’t love me. You told my people a riddle and you will not tell me the answer”. Samson had not even told his parents the answer to the riddle, but because of his wife’s *vexing mood*, he told her the answer. Trust me, if Samson was a Nigerian, he would have hoarded the answer. He would have wondered why she wanted to know the answer and probably gave a fake answer to her; but my dear Samson never thought in that lane.

I’m pretty sure that Samson’s in-laws are Nigerians. They gave Samson’s wife to his best man at the wedding because they felt Samson hated her. For where??? I’m certain that the best man is a rich dude that settled them with some money, and they just gave the lady like that to him and forgot about Samson. They thought that because  Samson isn’t a Nigerian, they could play wise on him. Samson was so angry when he found out and he destroyed the philistine’s fields, their vineyards and their Olive trees.  He destroyed them. The little money he spent for the party wouldn’t just waste like that; he had to pay back. Lol

Samson fell in love with Dellilah. I’m 100% sure that Delilah was a Nigerian. The rulers of the philistines too are like Nigerians, they wanted to know about Samson’s power (the source) and the only way was to go through bribery. They promised to give Delilah 28 pounds of silver. Delilah grabbed the offer as a real Nigerian lady (real business) and immediately she started her findings.  She said to Samson plainly “tell me why you are so strong. How could someone tie you up and make you helpless?”.  I’m thinking they were on a vacation somewhere when she asked this question, and I’m so sure she was so emotional about it like “Samson, I love you… Please tell me”.  Samson on his part could see the love in Delilah’s eyes but his senses didn’t fail him @ all. Maybe he was beginning to think like a Nigerian guy like “Why does she want to know sef?” He probably might have seen a red light. Samson lied to her three times. Delilah as a real Nigerian woman in need of a favour from her husband cried to Samson and said to him “How can you say ‘I love you,’ when you don’t even trust me? You refuse to tell me your secret”.  Samson  definitely couldn’t think like a Nigerian, he couldn’t ask himself why his wife was so bent on knowing the secret behind his powers, he didn’t even bother about the fact that each time he lied to her about his powers she tried them out on him and called in the philistines; I guess if he was a Nigerian, he would have said to himself ‘this  lady wants to kill me’ and he would have stopped her from asking him. Rather he just thought to himself ‘My wife should know my secrets, afterall she’s my wife’. He felt tired of Delilah asking him about his secret and finally told her the truth.  Hehehehe… Why did you do that Samson???? Where are your senses????? Delilah as a sharp lady quickly knew that Samson had said the truth to her (the same way a Nigerian lady can tell when her husband is saying the truth or lying sometimes). She got Samson to sleep with his head on her lap (Soft spot to get him) and got a man to shave off the seven braids of Samson’s hair.  Please permit me to say that a Nigerian man will not sleep like the way Samson did. I still do not understand the kind of  Samson’s sleep  that he didnt notice a touch on his head.  I hail Delilah o.

He was finally caught and his eyes were plucked out. Delilah had her money; she felt ‘money can always supercede love’.  I’m sure she wasn’t present at the celebration in the temple where Samson killed more philistines than when he was alive and painfully, Samson died with the philistines.

Betrayal is evident in the story of Samson’s life. He was betrayed by his first wife, his in – laws and by Delilah.  Betrayal also made him destroy the philistines.
Betrayal is treachery. It’s a bad thing to be the cause of someone’s disaster.  Never betray a friend.
*love*

If you're just starting PR or you’re interested in the field, this list explains PR key terms so you don't have to be the one sitting at the meeting confused and nodding in agreement with words you have never heard before. Start your PR journey on the right foot. You can go ahead to learn more key terms. #yvonnetalks #theyewstar #publicrelationstips
In this video, I shared tips to help you ace your PR interview (based on my experience). Full video on my YouTube channel. Link in my bio. Watch, comment, share and subscribe. #yvonnetalks #theyewstar #youtubenigeria
Have you decided to focus on news that’s not related to the Coronavirus pandemic? How’s it working for you? The pandemic story has gained relevance in the media, and only a few are making deliberate efforts to divert to other story perspectives. At some point, I was addicted to checking the number of cases globally and wouldn’t sleep until NCDC publishes numbers for the day. It was terrible. However, beyond monitoring the numbers, there are a couple of ways to change lives in the pandemic. These are some suggestions I put together. Together, we can impact lives. #yvonnetalks #theyewstar #changinglives
In this class, I’ll educate on; - The social sector and its ultimate goal - What is storytelling? - The impact of storytelling/ comms in the social sector. The power of storytelling - The secret to better storytelling for social change. If you don’t want to miss this learning experience, register with this link Bit.ly/SSStorytelling #yvonnetalks #theyewstar #communication
I’d train on influence and social marketing and I’m super excited to do this. #yvonnetalks #publicrelation #socialmarketing #theyewstar
The differences between traditional PR and digital PR are evident in tactics, including the way relationships are built and the channels in which they reach their audience. In my latest video, I explained seven steps to guide you in creating a digital PR plan. Interested in learning? Link in my bio. #yvonnetalks #theyewstar #nigerianyoutuber #thefathersbeloved⭐️
Watch video! As believers, we have received a new life, but this new life doesn’t mean you’re excluded from the reality of challenging times. #yvonnetalks #thefathersbeloved⭐️ #theyewstar #christians
So, my newly uploaded YouTube video is a summary of “Purposefully,” a book written by Pastor Emmanuel Iren (@pst_iren ) It’s a book that every person MUST and SHOULD read. Too often, people (myself too) have always asked the big question: “What is my purpose?” Oh well, the writer has done a good job to debunk the misconceptions about Purpose and revealed the truth about this topic. Use the link in my bio to watch the full video or search for “The Yewstar” on YouTube to watch and subscribe. #yvonnetalks #thefathersbeloved⭐️ #theyewstar #nigerianyoutuber
There’s no hiding from God’s love. Should I dance on the heights Or make my bed among the depths Your mercy waits at every end Like You planned it from the start Should the dawn come with wings Or find me far-side of the sea There Your hand still fastens me Ever closer to Your heart, oh Highs and lows Lord, You're with me either way it goes Should I rise or should I fall? Even so Lord, Your mercy is an even flow Should I rise or should I fall? You are faithful through it all You're too good to let me go . Highs and Lows by Hillsong #yvonnetalks #thefathersbeloved #theyewstar #godslove
Last year November, I organized my first conference. I had fears about the event that I almost cancelled, thank God for true friends. I kept imagining how empty the hall would be and if the speakers would even show up. After drowning in my fears, I told a friend that I needed to postpone the conference. This didn’t work out because he gave me countless reasons to let go of my fears. Guess what! I released the event fliers three days to the event date (fear is not nice o 😂) and I had to close the registration link because I had too many people register; even more than my targeted number. Everything I needed, I got them. God provided. The event held at Microsoft Office in VI, the speakers showed up, people attended and they had food to eat while networking. The event was a success! God always makes a way. In church, we have been learning about “Master Peace.” Fear is a spirit and it causes anxiety; however, the truth remains in 2Tim 1:17 “For God hath not given us the spirit of fear, but of power, and of love, and of a sound mind.” Fear has crippled me so many times. Anxiety has made me lose opportunities but I pray and I know that It won’t anymore. #yvonnetalks #thefathersbeloved⭐️ #theyewstar #nolongeraslavetofear 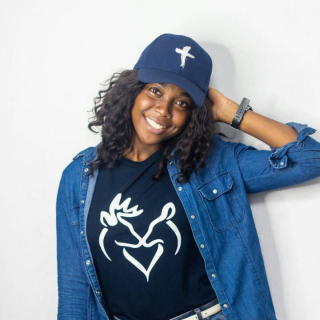 A girl with Endless Possibilities!!!